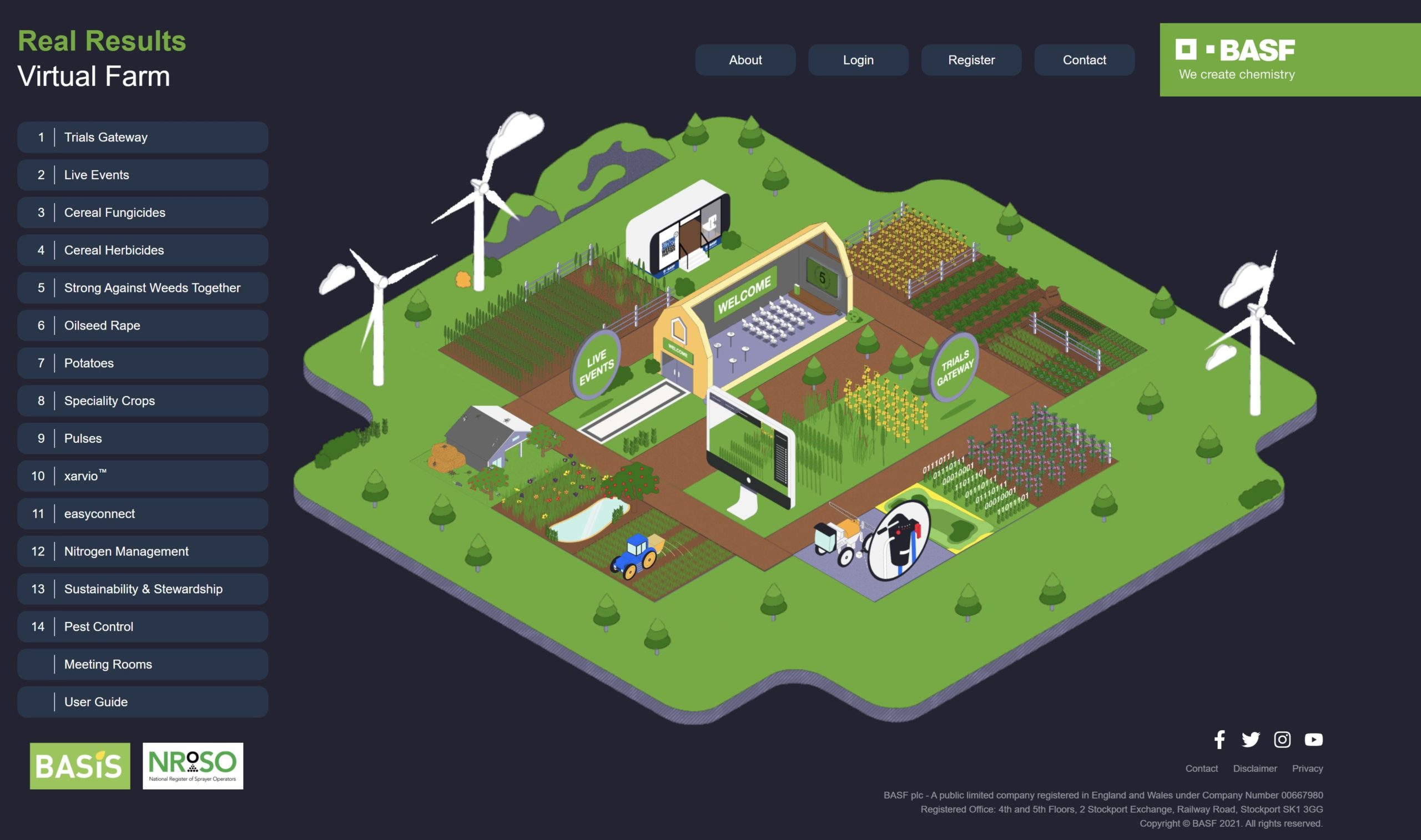 Growers and agronomists took refuge from the heatwave earlier this month and logged on to the BASF’s Virtual Farm to explore newly uploaded virtual trials, watch live webinars and explore the site’s new look.

Throughout ‘Digital Demo Week’, BASF showcased a wide range of new products.  For many viewers it’ll have been their first chance to assess the performance of the new cereal herbicide, Luximo, and BAS657, the new potato fungicide.

“The Virtual Farm has become a knowledge hub for our farming community,” says Polly Lawman, BASF’s market approach manager.  “The breadth and depth of content on the site is growing. Our Real Results community tell us it’s incredibly useful to have a permanent and accurate record of trials, free access to independent and BASF expertise through the webinars and, of course, the CPD points that are available through the site.”

Digital Demo Week kicked off with the launch of the new Trials Gateway.  A virtual space where users can explore trials at six of the company’s demonstration sites, as well as this year’s cereal herbicide trial at Hardwick, a recent potato fungicide trial at Eurofins, and the 2020 cereal fungicide trial in Herefordshire. Users can explore trials on their own with 3600 views, the ability to zoom into individual plots and compare treatments side-by-side, or join experts for a guided tour.

By comparing a range of flufenacet-based programmes with Luximo-based programmes, this trial explores the relative levels of efficacy of BASF’s hotly anticipated new grassweed herbicide.

“Luximo brings a new mode of action to market,” explains Stuart Kevis, BASF’s resident blackgrass expert and virtual tour guide. “These trials neatly demonstrate how the product increases the base-level of performance and how that is carried through as herbicide stacks are built.”

While the trial plots include the useful comparison of solo treatments of Luximo and flufenacet, tour guides BASF’s Stuart Kevis and NIAB’s John Cussans, both strongly advise growers to protect chemistry’s longevity by continuing with cultural controls. To emphasise the point, the pair review two plots with the strongest effect coming from the delayed drilled plot utilising a Luximo programme.

Renowned for putting products through their paces with artificially high levels of late blight, Eurofins is the go-to site for anyone wanting to test product performance. In this trial BASF explores the efficacy of its new blight spray BAS657 and looks at Enervin SC’s performance in various tank mixes.

“BAS657 combines two actives, ametoctradin and potassium phosphonate, in a syntech formulation which ‘punches above its weight’ and delivers some of the best blight control on the site,” notes Paul Goddard, BASF’s value chain and stewardship manager.  “Ametoctradin has a unique mode of action based on QoSi chemistry, which is helpful when putting together a programme. Combined with potassium phosphonate, which induces in-host defence in BAS657, they bring multi-site systemic activity.”

As a straight formulation of ametoctradin, Enervin SC has been designed to offer growers and agronomists flexibility within programmes, and the trials at Eurofins provides insights into product performance with tank-mix partners such as mandipropamid, cymoxanil and propamocarb.  In addition, viewers can also see BASF’s ‘standard’ treatment, what Paul calls ‘Percos plus’.

“The ‘plus’ is the drift retardant,” explains Paul.  “This is a ‘top drawer’ treatment. Both here at Eurofins, and at SRUC, we regularly see it offering better control than other market favourites.  It contains ametoctradin and dimethomorph and therefore brings that new QoSi chemistry to the table.”

Aiming to investigate the interactions between chemistry and genetics, this trial explores five agronomic topics across 32 varieties and six fungicide programmes from the Spring 2020 season.

The new Trials Gateway gives users the option to explore the plots individually, as well as compare treatments across the varieties, and view the treated versus untreated variety plots side-by-side.  Dr Jon Helliwell, BASF’s cereal fungicide business development manager, is also on-hand via the guided tour videos to provide further background and insights.

“It was a particularly useful trial to explore different agronomic approaches in the absence of Septoria. A similar digitisation was performed this year in a very different season, in the South West at Hurcott.

“Growers can see how a broad range of genetics interact with fungicides in one of the highest Septoria pressures in recent times, having all the untreated plots for comparison.  Content from both contrasting years will be available for future reference on the Virtual Farm to contrast different seasons, disease pressure and agronomic performance” he adds.

Visitors to the Virtual Farm can already see content of other 2021 trials in the ‘Fungicide Zone’.  The section ‘Demo Sites’ has drone footage, stills and video of plots from six locations in England, allowing users to pick and assess the performance of fungicide programmes and varieties at the sites where conditions most closely mirror their own.

Bringing experts from across the company, BASF hosted two webinars in the Live Events Zone.

Kicking off the discussion was footage of John Cussans from NIAB presenting the results of a series of trials from the organisation’s Hardwick site.  Designed to explore the hierarchy of blackgrass controls, John showed how delayed drilling led to the biggest reduction in plant numbers.  This was followed by product choice, application timing and finally, application technique.

“We’ve always encouraged growers to pay attention to the details and optimise every aspect of blackgrass control. But it is pointless to optimise activities which have a relatively small impact, if the measures which have the biggest impact, like delayed drilling and optimum timing of application, aren’t being deployed,” said John.

In the discussion that followed “controlling blackgrass is a numbers game” was the take-home message with Stuart exploring resistance management and the role of the new pre-emergence herbicide, Luximo.

Louis demonstrated how xarvio FIELD MANAGER, BASF’s online digital solution, can help achieve a further 1 or 2% more control through pinpoint accuracy in mapping and spraying plants and patches.  “The tool’s variable seed rates can be manually adjusted, which is useful for those looking to increase crop competition. For those seeking more drastic action, FIELD MANAGER’s new biodiversity planning layers can help identify non-commercial activities likely to have the greatest environmental benefits,” said Louis.

xarvio’s comprehensive suite of features also came into play in the second webinar which looked at this season’s disease control in wheat and barley. With features that assist with the optimisation of fungicide application timings and variable rate applications to optimise dose, xarvio has an important role in any IPM strategy.

David Leahy, BASF’s technical fungicide expert in Ireland, drew on barley trials to provide an overview of the season so far.

“It wasn’t just agronomists that have had a stressful season,” he said. “Barley suffered with the very cold and wet spring. And this stress made crops more prone to scorching from heavy tank-mixes and led to high pressure from ramularia.”

“The fact we’ve lost CTL this year has come home to roost. It’s had a marked impact on programmes, not just in wheat but in barley too. There is now no one-can solution for controlling ramularia in barley.  Control of this disease now relies on growers keeping crops as strong and healthy as possible from establishment onwards. In trials and on farms in Ireland, Revysol® had a very powerful effect at T2 and maintained a green crop for longer.”

“It’s been quite eye-opening to see how different disease control strategies have performed this year, the first season without CTL” he said.

“But that’s not the only unusual aspect of this season. As we approached T1, back in March and April it was quite cool and dry, as a result many concluded Septoria pressure in wheat was very low.  This led many to reduce T1s, either by choosing a weaker product or reducing the dosage.  In addition, T2 timings were delayed – by nearly four weeks in trials, longer on-farms.  And that put pressure on leaf two and the emerging flag leaf. This was compounded by apparent unexpected changes in genetic susceptibility.

“Our 2021 trials showed where T1 applications remained robust, they had a significant contribution in mitigating the pressure from Septoria on upper leaves later in the season.  They also reinforced our previous findings that Revystar® XE has longevity. Both are aspects to consider as we start to consider the next growing season.”

To delve into the detail of this trial and those on other BASF demonstration farms, or to catch-up on the herbicide webinar visit the ‘webinar archive’ in the Live Events Zone at www.basfrealresultsfarm.com. To explore the virtual trials and watch the guided tours, head to the Trials Gateway.