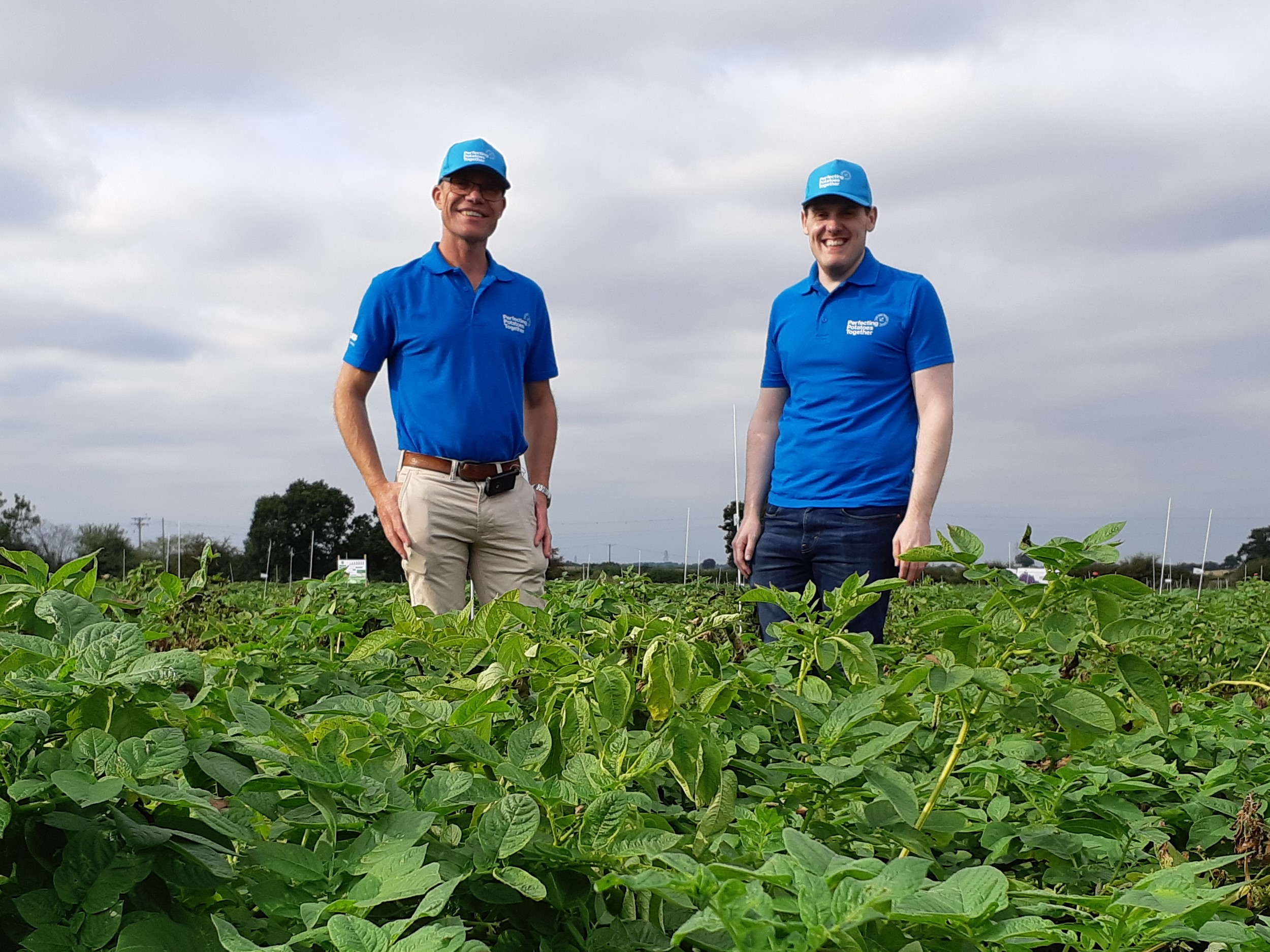 With susceptible crops, irrigated and inoculated with the most virulent strains, Eurofins is one of the toughest tests for crop protection products.

BASF’s portfolio of fungicides, however, rose to the challenge with its existing products, Enervin SC and Percos, both offering strong efficacy against late blight.  The event also presented growers and agronomists a first glimpse of the company’s new products; BAS 657 and BAS 750, which were both looking strong on late blight and alternaria respectively.

“Our plots showcased a variety of treatments which all have real-world relevance,” explains Paul Goddard, BASF’s value chain and stewardship manager. “We had plots treated with oxathiapiprolin + amisulbrom and fluopicolide + propamocarb as two benchmarks for our late blight treatments. I avoid untreated plots at Eurofins because of the disease sink they create for the surrounding plots.

“In the trial plots visitors could see Enervin SC tank-mixed with three potential partner products, our new fungicide currently known as BAS 657, Percos plus drift retardant and a new product coded as BAS 750.”

Together the plots showed the strength of BASF’s product pipeline and confirmed Enervin SC as a powerful tank-mix partner, particularly useful where growers want flexibility in their programmes.

“Enervin SC is not a product to be used on its own,” explains Mr Goddard.  “It’s got a single site mode of action, which must not be left exposed. Ametoctradin sits in a FRAC group of its own and so the MOA does not clash with any other group of actives, such as the QiIs or CAAs. This makes it very useful when building a programme that doesn’t exceed recommendations on use, especially when we get a challenging season where late blight turns against us.”

“Many would opt for the lower rate so that’s what we did and the mix with Enervin SC did a very good job,” notes Mr Goddard.

“While the tank-mix with cymoxanil + zoxamide was the weakest of the treatments, it is a combination that doesn’t clash with any CAAs or QIIs in a programme.  In a field situation, where the ‘infection triangle’ of host, inoculum and conditions, isn’t so heavily loaded against you, it would prove another useful option.”

The final tank-mix plot saw both products applied at 80% of full rate to deliver, 200g ametoctradin and 125g mandipropamid.

“Both partners are what I’d call ‘top drawer’ and this trial was about being sensible with regard to cost. Do you need both at full rates? Well, if you want a blight free plot with the pressure that was at the site this year, yes, we do. However, with a lower, more realistic pressure in a field situation, you probably wouldn’t.”

Alongside the plots treated with Enervin SC, were those treated with Percos and BASF’s latest late blight product, BAS 657 which will be available next season pending approval from the regulators.

“The plots showed how Percos plus drift retardant is another ‘top drawer’ combination, as is our new product BAS 657,” said Mr Goddard.  “BAS 657 is a combination of Enervin SC’s active ingredient, ametoctradin, formulated with potassium phosphonate to deliver genuine synergy. With multisite and truly systemic activity, it gives great overall protection and fits very well early in the programme, freeing up slots for other actives later where they may be better targeted or when saving the strongest for when blight really gets cooking.”

For the first time BASF also had plots of Markies which were inoculated with alternaria solani.

“We’ve an exciting product coded as BAS 750 containing our new blockbuster AI, Revysol, coming to the potato crop, with approval anticipated before the year end. Revysol is the first isopropanol-azole, a unique chemistry discovered and developed by BASF combining an outstanding performance with a favourable regulatory profile and selectivity.

“In trials this has consistently demonstrated it delivers a new level of efficacy; similar to the step up we saw in late blight control when oxathiapiprolin came along. Control of alternaria is stronger and more reliable than the current go-to triazole standard.”