Make the most of what you have – Ythanside Farmers 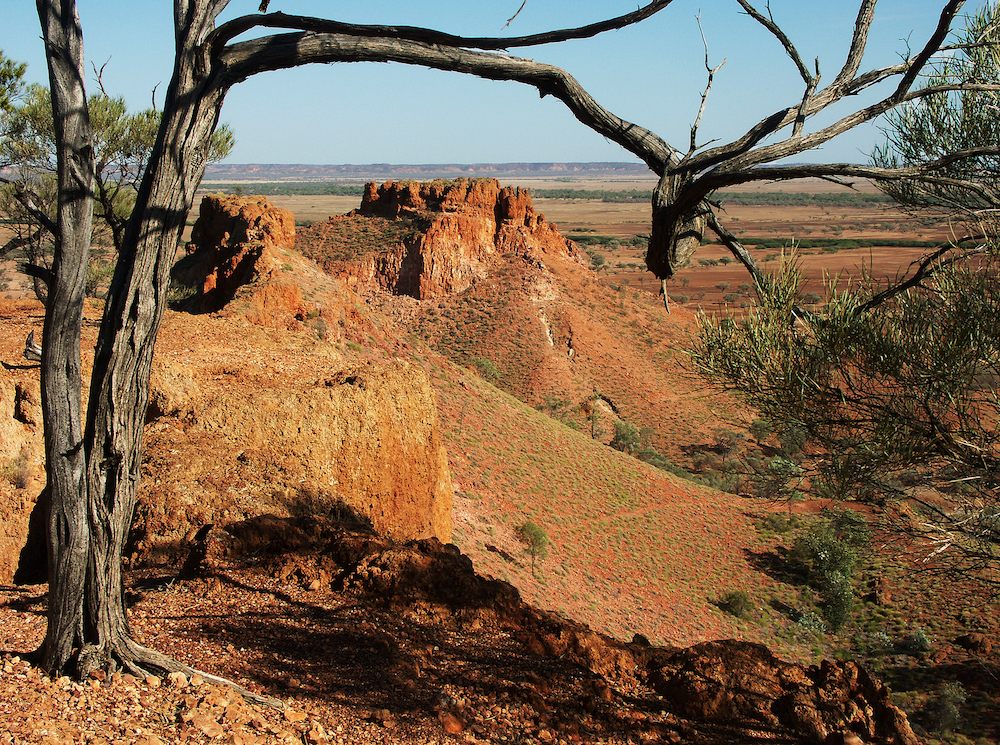 On Friday 17th November 2017, Jane was asked to speak at the Ythanside Farmers dinner – a particularly significant occasion as she was the first woman to be invited to speak to the group. Here is a copy of her speech….

Good evening, it’s an honour to be 1st woman to speak at the Ythanside Farmers dinner. Thank-you for inviting me.

I’m the daughter of a spy, and whilst my accent belies it, I’m a local quine. my father is from Kingston – on Spey, not Jamaica – and my Mum is from Buckie.  I was brought up overseas in Cyprus, India and Turkey and through pleasure and work have been lucky to have visited close to 50 countries – including 9 months working on a sheep farm in Western Australia.

I don’t come from a farming background, but have developed a love of agriculture, the people in the industry and our sector’s importance to society.

My upbringing has made me curious, so it’s probably not surprising that, after finishing my degree in Agriculture, I have made a career in communications and, indirectly, journalism. More recently, I have become involved in agricultural and rural leadership, both here in Scotland and, increasingly, around the world; most recently I ran an event for some international farming leaders in Kentucky, USA.

I’m going to talk to you this evening about what strong leadership in farming and rural communities, coupled with creative storytelling and making the most of what you have, can achieve – even in the face of the most extreme of challenges.

We face some big challenges in Scottish farming – the uncertainty of Brexit, diminishing farm support and low market prices, to name but a few.

I’m going to tell you a story of a place that bears little obvious connection with Scotland, a place, like Scotland, that is dear to my heart. The story is of Outback Australia during its recent devastating drought, it’s the story of the resilience of its rural people and the positive impact of strong, bold leadership.

There are lots of similarities between Australia and Scotland and there are learnings we can take from their rural communities as we look to our own future.

My story is about Outback Queensland. I arrived in Longreach [distance from where] in October 2015 when the region was in its fifth year of drought. Quite literally, no rain had fallen for five farming seasons. Many farms had destocked because they had no feed, nor grazing.

Even before the drought, their land was fragile, sandy and arid. Added to their challenges, the massive problem of wild dogs – feral dingo cross domesticated dogs – has meant that farmers can no longer keep sheep and have had to move into cattle farming. The damaging footfall of cattle, combined with the desperate over-grazing during the drought, has left some of the land in severe threat from erosion once the rains eventually came.

Some farmers were clinging on to the last of their breeding animals and sustaining them as best they could. I heard of farmers walking their stock up to 40 miles a day, along the roadside, grazing the grass watered by the moisture that condensed on the hot bitumen as the day cooled to clear-skied night.

I met the Mayor of a town called Barcoo who needed to fence her whole town to prevent aggressive kangaroos, desperate for food and water, from coming into town and attacking residents. And I heard of a farmer who had pulled 100 dead kangaroos out of one of his farm dams that morning – the poor animals had sought water and got stuck in the muddy base of the dam and died. I heard of a number of tragic suicides – people who felt they could take no more.

Amidst my harrowing trip, I had the most humbling highlight – visiting a Queensland town called Winton.

Let me paint a picture of Winton. If you drove through this town of 980 residents at 3am on a Monday morning, you’d be forgiven for thinking it was a wild west frontier town just missing the tumbleweed.

This analogy couldn’t be further from the reality.

Winton is an outback town that has developed and innovated in remarkable ways, really making the most of the eclectic things that it has and firmly putting it on the tourism and economic map.

Winton’s four regional mayors, three of them farmers, had a vision to make Winton economically resilient, building infrastructure, attractions and events that would benefit the whole community. They started this direction of travel years before this most recent drought, investing for the long-term cognoscente of the fact that 3 years in 10 are likely to be severe drought years.

Amidst the despair of the drought elsewhere in the state, there was a sense of optimism in Winton, despite their troubles.

Because they had invested in their stories, their landscape and a lucky find of many dinosaur bones.

Waltzing Mathilda, Australia’s unofficial national anthem, was written in the town of Winton. They built a Waltzing Mathilda Museum. From this they decided to capitalise on their folk and country music heritage and started The Outback Music Festival. They then employed a tourism development manager, just for Winton – just as Turriff might.

They then recognised their landscape was photogenic and started approaching film makers, a few came. On the back of these small successes they launched The Outback Film Festival, and are now building a Hollywood-esque Wild West film set in their stunning, rugged scenery – their aim is to attract the world’s top movie-makers. True to their vision, John Elliot, the tourism manager was in Los Angeles last month meeting some of these movie-makers.

Winton is investing in a motel and lairage facility to make the most of their location on a road-train intersection. To give weary truck drivers – and their beasts – a place to stop, eat and sleep.

They have a Dinosaur Experience developed after a lucky find – by a farmer – of bones from multiple species of these prehistoric beasts. Winton is now home to a serious Palaeontology research facility and two fabulous dinosaur visitor attractions. 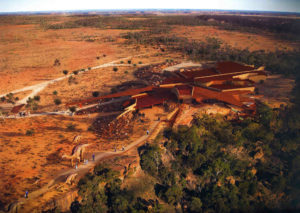 Age of Dinosaurs at Winton, Australia

All these visitor attractions have made Winton a destination which has encouraged hoteliers and restauranteurs to develop their food and drink offers – serving the best of Australian beef, rum and traditional outback cuisine – like damper bread and Billy Can tea.

Winton’s four brilliant mayors really have had the vision to lead and invest in Winton’s seemingly ‘scant’ lot, creatively uniting a folk song, landscape, location and some old bones to build long-term resilience.

There’s a lot that Scotland has in common with Winton in Australia – land that is difficult to farm – in our case too rocky, cold or wet – isolated communities needing better broadband and an economic need to diversify into other activities to support many of our farming enterprises.

The similarities don’t end there, like Australia we have beautiful, filmable, visitable landscape, an even richer heritage of folk music than theirs and, arguably, an even more compelling history – including clans, world-famous battles and the most ancient of human-inhabited places.

Like Australia the Scots are entrepreneurial, we try things, we innovate. We are one of the world’s leaders in building diversified farm businesses, we are pioneers in soft fruit breeding and growing, we are trailblazing in developing the world’s insatiable appetite for craft gin – and tonic – with the first Scottish manufacturer, Summerhouse Drinks, just outside Fraserburgh.

We produce some of the world’s most iconic foods and drinks – Scotch Beef, Scotch whisky and Scottish Seafood – worth over £5 billion to our economy.

All of this is borne of farming and our land. And we are doing so much, so incredibly well. But, with the challenges I mentioned earlier we cannot rest on our laurels and need to ask ourselves how can we ensure farming’s secure future up here in the North East of Scotland?

The beliefs I have, going forward are, in no particular order:

With the right leadership, vision and creativity we can curate many reasons for people to come to our corner of Scotland, to spend their money here and to support our farming and rural communities.

I believe that most farms will need an income from at least one other source to prosper, for some, even to survive. 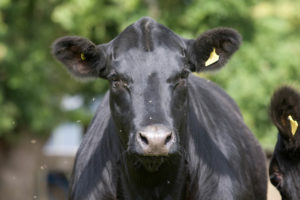 Aberdeenshire can become a world-class food, drink and tourism destination – we have started, but could do so much more. To attract more people, we need to better link up our farms to our food story; serve outstanding local food, of known provenance in more attractive places to eat – that stay open later. We need to open more of our farms to people interested in hearing our farming story.

I believe that nothing in insurmountable if we work together – policy-makers, Aberdeenshire Council, farmers, distilleries, hoteliers, castles, fishermen – the list doesn’t end there.

From first-hand experience, I believe that we have a willing and supportive Government that sees tourism, food, drink and agriculture as vital to Scotland’s future economic prosperity. And they’re investing in the sector, unlike in England.

We have everything to go at internationally – currently just 100 companies account for 60% of Scotland’s exports – the Scottish Government wants to support much more.

I believe that we need to stop thinking and working in farming’s silos and think brand Scotland – Aberdeen Angus is a great breed, but Scotch Beef is our national, exportable brand that benefits all beef farmers and a wider food footprint. Speyside malts are by far the best drams, in my opinion, but Scotch whisky is the iconic umbrella brand that brings Scotland £4.3bn in export revenues.

I believe that we need leaders who think bold, long-term and joined up. I remember one such leader well – Maitland Mackie – in 2004 – peddling his idea of a network of farmer-owned wind farms in Scotland, all connected, all feeding into the grid, many thought him a crazy man, but look at our windmilled landscape now – and renewable’s contribution to our energy economy. This man was the kind of visionary we need for our long-term future.

I strongly believe that, like Winton in Australia, we have everything to play for in this beautiful corner of Scotland. And that, despite our many challenges, and being completely anti-Brexit, Aberdeenshire has a bright, agriculture-centric future.