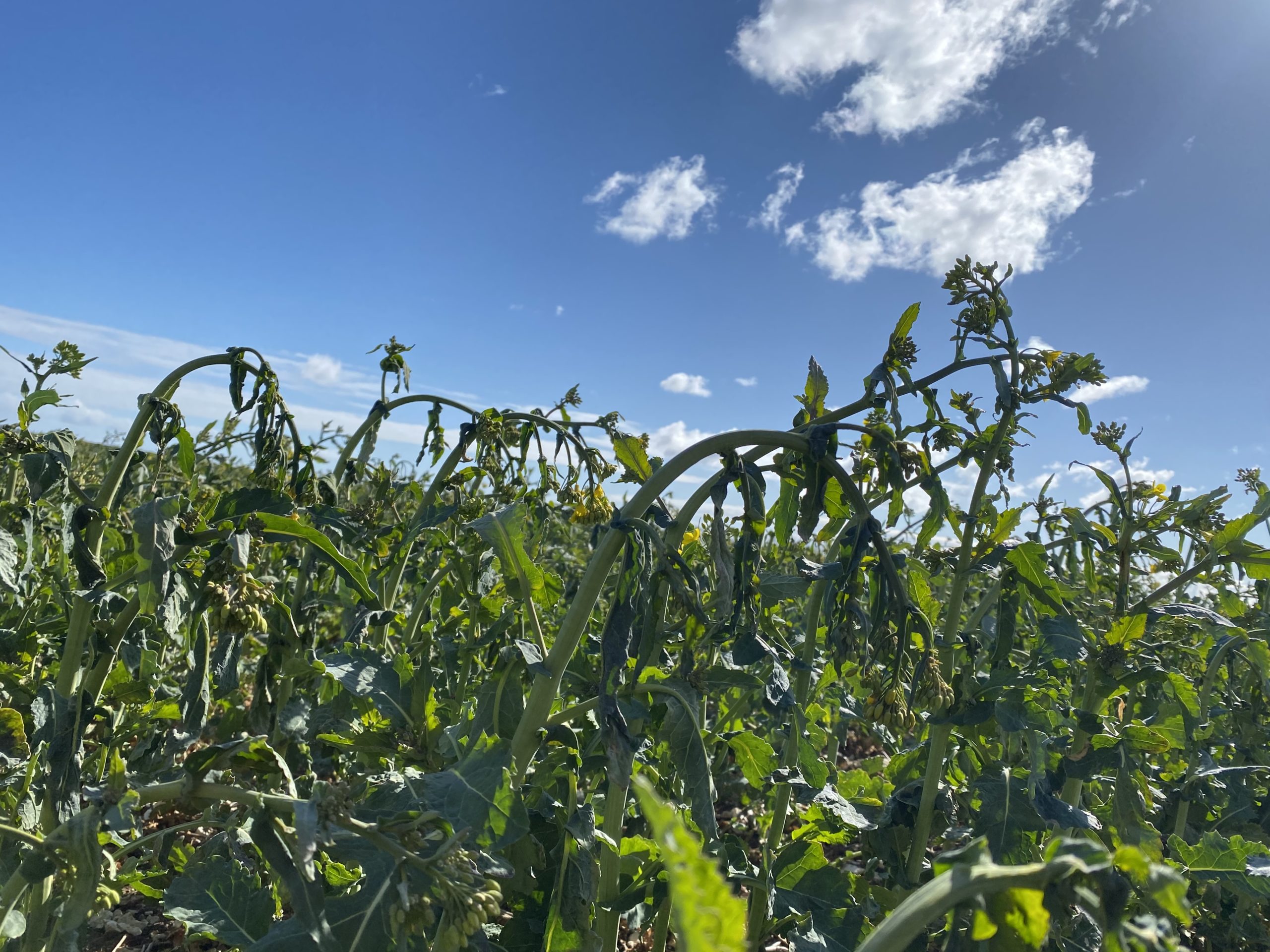 The source limited nature of our wheat varieties today means that disease has a bigger impact on yield than it did some years ago.

Dr Julie Smith, Principal Research Scientist, ADAS said, “Wheat plants intercept sunshine (solar radiation) and convert that energy to grain, and so to yield. For the crop to achieve its yield potential it needs a balanced source/sink ratio, which is dependent on the number and size of grain sites (sink) and the availability of assimilates to fill the grain sites (source).”

Advances in wheat breeding over the last 30 years have given enormous changes in modern wheat varieties.  Dr Smith said, “Yield has increased greatly, largely through increases in grains/m2, so the sink capacity of the crop has been enlarged by breeding efforts and although the source capacity has also increased, it has not kept pace with increases in sink. This means that modern wheat varieties tend to be source limited.”

Simply, source capacity is determined by the amount of solar radiation which can be absorbed by the healthy canopy after flowering, the efficiency with which light energy can be converted into dry matter and the amount of water-soluble carbohydrates the crop can store and then remobilise during grain filling if it can’t get enough energy from photosynthesis during the critical period.

Dr Smith said, “In an ideal world we want the source and sink capacity to be perfectly balanced to achieve maximum yield and reflect an efficient crop.  Too much source (relative to sink) is wasteful because it can’t be stored.  It’s expensive to produce and maintain a healthy canopy so we don’t want a bigger canopy than is necessary.  Conversely, if the crop is source limited relative to its sink it can never reach yield potential because the grain sites can’t be fully filled.

The timely application of appropriate fungicides protects the upper canopy from disease. The flag leaf, leaf 2, 3 and 4 all intercept solar radiation and contribute to yield production. A foliar disease like septoria reduces the amount of green leaf area because of lesions, necrosis and chlorosis, impacting the amount of solar radiation the leaf can absorb, so further limiting the source.”

As well as protecting the foliage from disease, good agronomy can give some control over source and sink components. The healthy canopy size can be manipulated by using an appropriate seed rate, ensuring adequate nitrogen, and minimising lodging.

Cold, dry weather has gripped the entire country in recent weeks but with prices buoyant, there is yield potential to be looked after. Here, BASF agronomy managers give an update on crops in their areas.

In Scotland, it’s an optimistic picture across the country with all crops looking well although recent cold weather has slowed growth. Scott Milne said, “Winter wheat crops are at mixed growth stages with the bulk of the area approaching T1. Septoria is around on the lower leaves and will be our main issue, as usual, given we are a maritime climate that favours this disease.”

Neil Thomson agreed, “In Southern Scotland there is a lot of really good yield potential in the winter wheat crops. Many crops were forward, however, with recent cold and dry weather they have slowed down a bit. There is quite a lot of septoria at the base of plants, we really can’t let our guard down with regards to this even with the recent drier spell of weather. The problem we can have up here is that some of the varieties on the AHDB Recommended List are drilled a lot earlier than would be the case further south so disease pressure can be a lot higher. There is a good opportunity to use a Revysol® (mefentrifluconazole) based product at T1 to stop septoria moving up the canopy when the weather breaks.”

In the winter oilseed rape  pigeons have been a problem across the country, especially so in the cold spells of weather.

Mr Milne said, “With nitrogen now on, crops have grown away from the damage, even those that were absolutely decimated by pigeons and it just shows how hardy a crop oilseed rape is. There is a fair amount of Light Leaf Spot in crops, especially those which didn’t get an autumn fungicide. Crop growth stages range from green bud to flowering and crops are now being assessed to identify those which will benefit from an application of Caryx® (metconazole +mepiquat chloride).”

In the Borders there have been reports of rape winter stem weevil. Mr Thomson said, “It is just  in certain geographical areas so we will have to keep an eye out for that next season.”

Spring barley drilling went well in the south of Scotland, with good conditions ensuring all crops were rolled and had a pre-em herbicide.  Further north, snow over the Easter weekend curtailed drilling, however, the vast majority of crops are now sown.

Mr Milne said, “The demise of chlorothalonil (CTL) will have a huge impact on ramularia control in barley. We need to reduce stress within the crop and a T1 on spring barley will allow control of the primary diseases, rhynchosporium and net blotch, helping to reduce stress. Growers also need to ensure trace elements are available to the crop. Here we grow mainly malting barley where we are reducing the amount of nitrogen to hit the malting specification and that in itself causes stress, so anything growers can do to reduce stress is absolutely the right thing to do.”

In Yorkshire, Mathew Barnes said, “We are now moving into the T1 timing with the winter wheat. Some crops did get a T0, and some didn’t  as growers shied away from application because of the wind, cold and the backwards nature of the crop. Those T0’s that were applied focussed on Yellow Rust and growth regulation.”

He said, “Some of the crops look to have real potential but a few of the late drilled crops are struggling a bit. A wet start to the year and now this period of dry cold weather has added to the stress. The wet winter meant high levels of septoria bubbling away in the bottom of the crop and that is still there.”

Colin Mountford- Smith’s area covers Lancashire down to Leicestershire, he said, “Winter wheat is looking good. Cooler, dry conditions have slowed crop growth, delaying some T0’s, with others missed out completely, so the  T1 spray is likely to be pushed back a week or so in this region.

Although its dry at the moment growers have to remember that we are spraying for future weather and not the current conditions and we have to look after the potential.”

In the east of Mr Mountford- Smith’s area there is Yellow Rust on susceptible varieties, reducing as you head west but there is septoria readily found everywhere.

The spring drilling is now complete  and oilseed rape crops in the area are approaching mid – flowering.

In Yorkshire, the prevailing cold, dry weather has had a detrimental effect on some of the forward crops of  winter oilseed rape. Mr Barnes said, “The sharp frosts have meant that some plants  have lost the main raceme, this by itself isn’t a huge issue, they will grow back, but it may have implications for ingress of disease.”

Most winter wheat crops established very well in Richard Guest’s area of Somerset, Devon and Cornwall. The frost and the cold has held back some crops, later drilled crops are still at GS 30 , with the advanced crops at GS 33.

Mr Guest said, “On farm there are a mix of drilling dates and this variability will need to be managed carefully because they are going to reach the earlier growth stages, at different times.”

Crop growth stage is driven by daylength but speeded up and influenced by temperature so it can vary, plus or minus a week, which is why it is important to do the growth stage dissection to get fungicide applications right.

Mr Guest said, “Growers need to accurately assess the growth stage of the crop, sampling across the whole crop and dissecting the main stems, which is where the majority of the yield comes from, to get an average growth stage. For T1, leaf 3 should  be fully emerged on the main tiller, which can look alarmingly late in forward crops.”

In Berkshire and Gloucestershire crops are mixed with early drilled September crops looking really well. Jenny Lawes said, “Plant growth regulators have been applied at T0, to minimise root lodging because after drilling there was a lot of moisture available, so crops are quite shallow rooted. As in other regions, there is septoria about at the base of plants and  dew and moisture from frosts has  allowed the disease to transfer up onto the leaves in the most susceptible varieties.

There’s more oilseed rape in this area than last year and we have some quality crops in the ground, most of them are flowering and some have been sprayed for sclerotinia even though its low risk at the moment. Crops which were hit badly by cabbage stem flea beetle (CSFB) are now much improved.”

In contrast, Mr Guest reports there is not a lot of winter oilseed rape in his area. However, he said, “There are already some questions coming in about varieties for the autumn, as with a very strong price and lower incidence of CSFB, it is now seen as worth the risk of growing.”