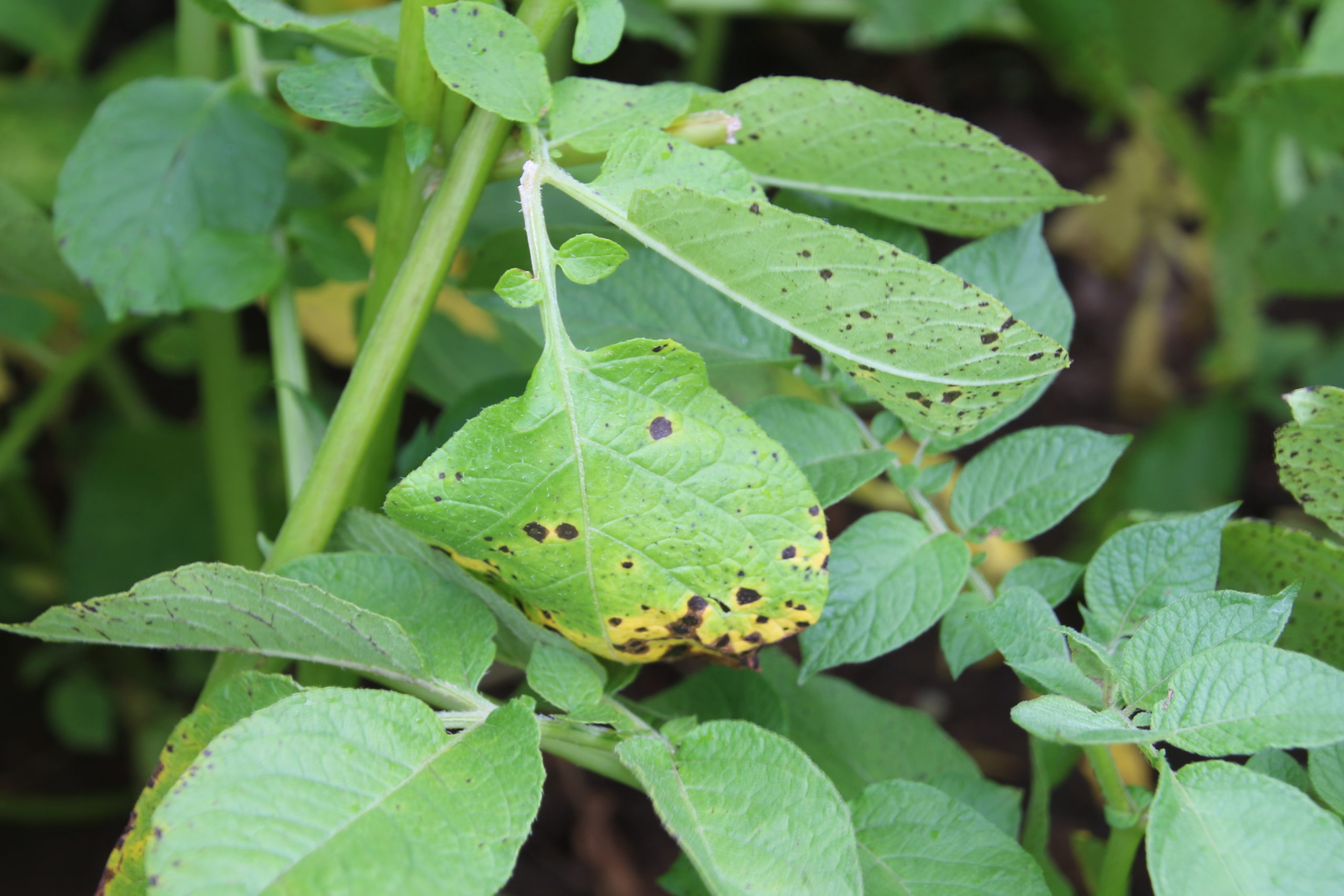 Alternaria used to be a minor disease. But for some potato crops in the UK, it’s now a significant threat that can cause substantial yield loss.  According to guests of the latest ‘Perfecting Potatoes Together’ podcast, the likelihood of infection has risen sharply in recent weeks as a number of risk factors have come together.

“With recent daytime temperatures between 20 to 30C, we’ve seen optimum temperatures for alternaria development, explains Ruairidh.  “We’ve also got some stressed crops around the country.  Those that have been irrigated are more likely to have experienced the alternating wet and dry conditions that favour the disease.”

“It’s the three sides of the infection pyramid,” adds Paul. “We’ve the spores, a susceptible host and the conditions coming together at the same time.”

There are two main species of alternaria; Alternaria solani, which causes early blight, and Alternaria alternata, which causes brown spot. Both diseases can be difficult to identify. The symptomatic dark lesions are sometimes confused with other diseases such as late blight, and physiological conditions like crop injury or ozone damage.

“What the industry really needs is a rapid in-field diagnostic tool and there are organisations that are trying to develop one,” notes Ruairidh.  “In the meantime, early blight’s lesions are shiny, think of a gloss-paint finish. More likely than not, they will also have a ‘target’ appearance – concentric rings within the lesion. There may also be yellowing around the lesions because the pathogen produces toxins, which interfere with the plant tissue and cause chlorosis. Late blight lesions don’t have these characteristics.”

“The problem is, the best time to treat varieties that are very susceptible to alternaria is before any symptoms are visible,” concedes Ruairidh. “Disease in these varieties can progress from the earliest symptoms to yield-limiting leaf damage in about a week. This means that starting the fungicide programme on these varieties when symptoms are first seen is very unlikely to be successful.”

“It’s a critical time for potato crops,” notes Paul. “Foliage is making the most of the long and intense summer daylight and the energy captured is being used to bulk-up tubers. Loss of green area now, will hamper yields.”

When it comes to controlling alternaria, Paul describes mancozeb as an unsung hero but with its anticipated withdrawal the conversation quickly turns to alternatives.  “Without mancozeb we’re reliant upon three chemistry groups: QoIs, the SDHIs and triazole chemistry,” he says.

“Signum is a useful product for alternaria control.  It’s currently available on an EAMU but that’s going to become an on-label use soon. Signum contains both SDHI and QoI chemistry, so while there is resistance out there, the co-formulation makes it a stronger option than either alone.

“Looking to the future, we have a very exciting product coming – BAS750 Revysol chemistry, an isopropanol triazole. It’s recently been approved in cereals and moved the game forward.  In our potato trials both here and in Europe, we’re seeing Revysol offer higher levels of control, more reliably than difenoconazole. And growers shouldn’t have too long to wait.  We’re expecting for approval before the end of this year, making it available for use next year.”

It’s welcome news for Ruairidh who is concerned about the lack of modes of action for long-term resistance.

“With mancozeb probably going at some time, it’s good to have another option.  In comparison with late blight, for example, we’ve one quarter of the modes of action to control alternaria and that’s not really enough.

“While resistance doesn’t mean QoIs and SDHIs aren’t effective – the proportion of resistance is crucial, for example – ideally growers and agronomists should have more options.  I did hear from researchers on the continent that there’s an early indication that the yet-to-be-approved active for late blight, potassium phosphonate, may give a reasonable level of alternaria control. And it’s a multi-site fungicide which will help when it comes to resistance management.”

To listen to the full episode visit: https://soundcloud.com/basf-ag-solutions-uk/basf-perfecting-potatoes-together-alternaria