4Sight Farming pilot project to drill down into data 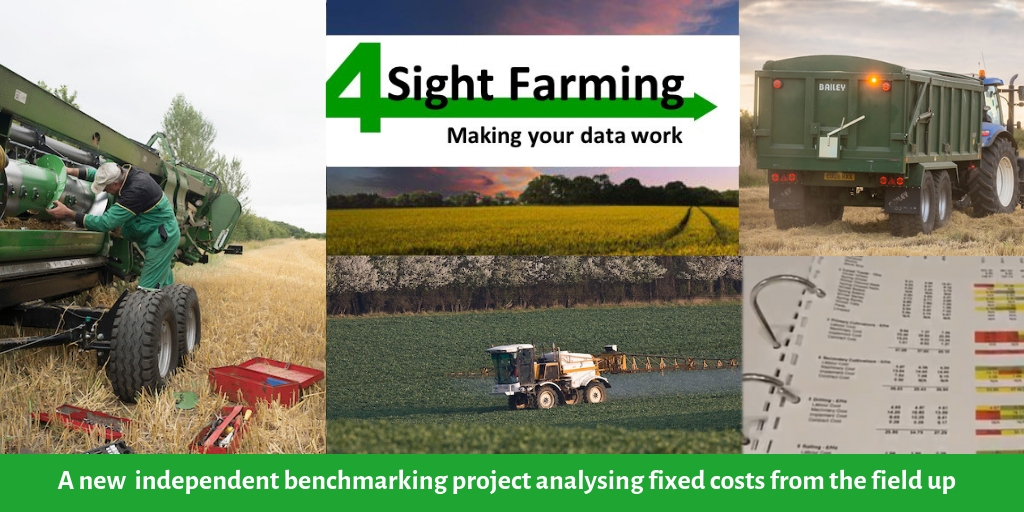 At JCM we are excited to be working with a brilliant new benchmarking project for arable farmers. Led by Eric Anderson of Scottish Agronomy, 4Sight Farming looks at the costs of producing a crop from field up and in much greater detail – not just the obvious inputs, or looking at the accounts at the end of the year and working backwards, but logging machinery and labour use as well to give farm businesses a more accurate analysis of actual costs per crop.

This will be combined with guidance on lean management to support farmers to make informed decisions when future planning particularly as they face uncertain times ahead. Read on to find out more…

4sight Farming, a benchmarking group formed by an independent agronomist for farmers, analyses detailed machinery and labour costs alongside variable inputs to give farming businesses a greater understanding of true costs per crop.

The year-long pilot project, which has been fully funded by the Scottish Government and the European Union through the SRDP Knowledge Transfer and Innovation Fund, will combine the findings of the data with lean management tools to help maximise the margins of 25 arable farming businesses in central and North-East Scotland.

Eric Anderson, senior agronomist with Scottish Agronomy, who initiated the project in partnership with four other organisations, including agricultural co-op and collaboration experts, SAOS, says:

“With so many unknowns ahead, I passionately believe making farmers data ‘work’ for them is the future. Working with some of our Scottish Agronomy members has shown that as much as 53% of wheat production costs are associated with machinery, fuel and labour inputs, yet there are no large-scale benchmarking projects that deliver an accurate picture of these costs per crop. By attributing fixed machinery and labour hours to each block of land, it will be clearer to farm business owners where efficiencies can be made, and, when combined with lean management tools, create opportunity to transform fixed costs for greater margins.

“With no clear commitment from the Scottish Government on the transitional changes after the UK leaves the European Union, it is more important than ever for Scottish farmers to have a full understanding of their business costs. This could be the difference between a farming business being fit for the future and struggling to make it work.”

Any part of the business that is using resources but is not adding to the end product needs to be analysed and corrected, Mr Anderson continues. He explains how the data produced from this project combined with lean management can change a farming business:

“Figures show that with the loss of BPS payments, 40% of wheat-growing land – and 60% of land for other combinable crops and potatoes – will not yield enough to cover actual production costs. Farming businesses need to know their true cost of production so they can make positive change in their businesses. A lean management approach could be merging blocks of land to reduce movement between fields or simply widening a gateway so a combine can move independently between fields without the cost of labour and fuel for a tractor and trailer to deliver the header.  If farmers have a grasp of all their costs from the field up they can make simple but effective changes with confidence.”

As well as analysis of the data they gather, all 25 farmers involved will benefit from workshops on lean management, financial planning and data protection workshops from SAOS, EQ and management consultants Urban Foresight.

George Noble of SAOS, which works with farming cooperatives across Scotland, said that they were keen to be involved as it is an exciting and important approach for the future:

“What is clear is that farmers need to be prepared for the future by maximising the value of the vast amounts of data that modern arable enterprises create, yet at present remains largely unused. The status quo is unsustainable and will be exacerbated, and farmers need to make effective decisions based on the data available to them. This project will allow farmers to make more informed decisions and also demonstrates the potential of co-operation and collaboration to achieve what would be impossible to resource and fund as an individual.”

Encouraged to see so much interest in the project, Mr Anderson explains why analysing fixed costs of production has historically been complicated:

“Most data comes from existing records which do not always include sufficient detail, and is often taken from financial records that have a different year end to the farming season. Without accurate information to benchmark against, it is very hard to make quality decisions, and this is where this project can offer a new lens to offer tangible solutions.”