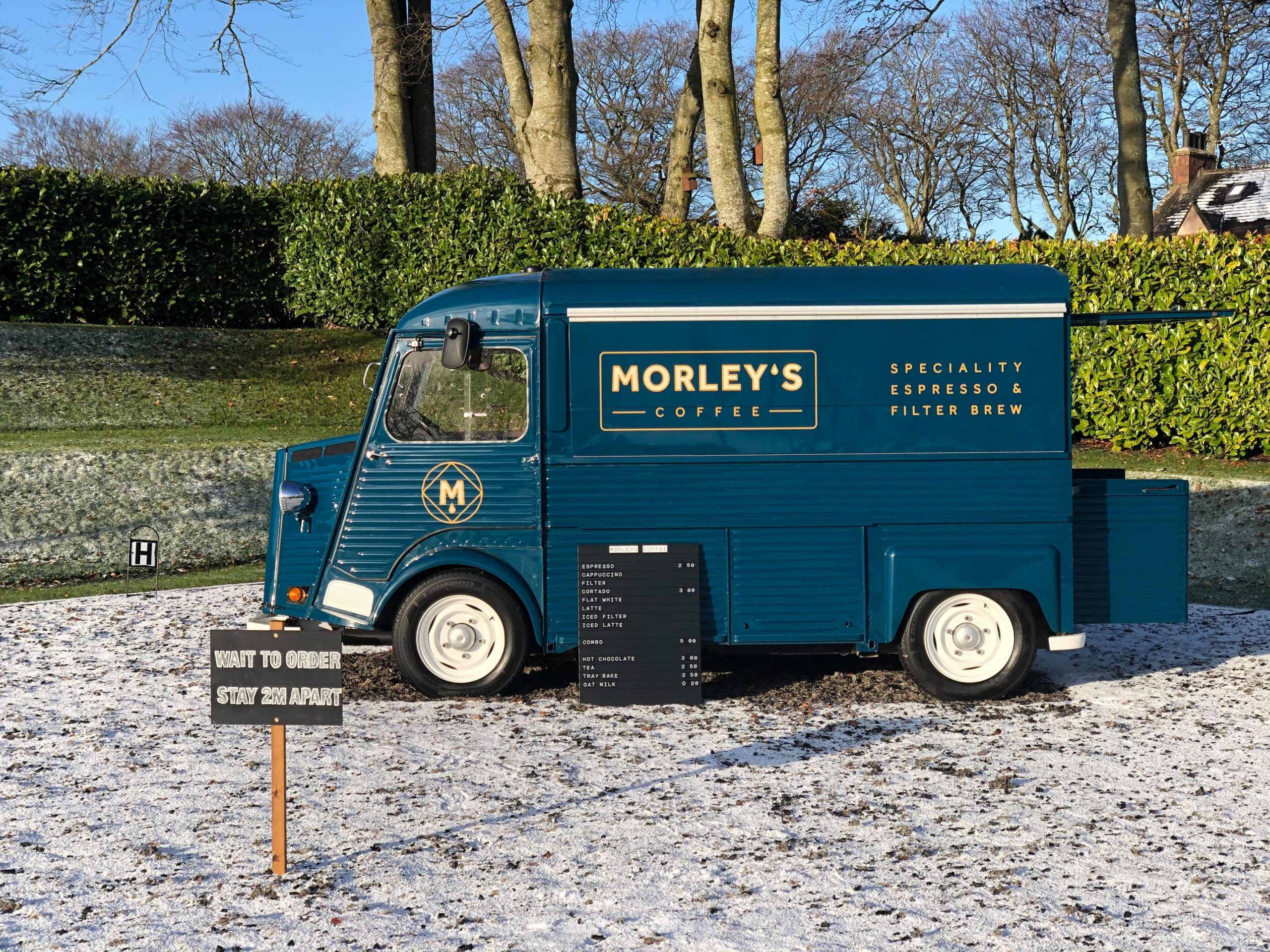 Austen Morley is in his early 20s and has opened a pop-up espresso and cocktail bar – Morley’s Coffee – at his home in Forglen, Aberdeenshire. He has received mentoring and marketing support from the Rural Youth Project for the last 18 months.

Austen is serving hot drinks, iced coffees and traybakes every Wednesday to Sunday inclusive from 10am to 4pm until the end of May. He will also be open for the May Day Bank Holiday.

The ‘bar’ is an iconic, fully restored 1971 Citroen HY van which Austen will hire out – fully staffed – for weddings and events after the pandemic.

The idea came to him whilst travelling in Australia – which has a huge coffee culture – and after working in London for a short spell.

He says: “I knew that the city life was never a long-term option for me, so decided to move back home to the countryside and to try and bring some of those good things that I experienced from the city back for rural people to enjoy.”

The van has been very busy since he opened in early “It has been fantastic meeting so many people who have made the effort to come out a try out my pop-up, on the opening day in early April, I probably had 25 car-loads of people throughout the day, despite the hail and wind.”

Austen is sourcing all of his supplies from as local as possible, and his ethos is to support small Scottish, independent brands. Covid, he says, has given him time to do a lot of research into choosing the right suppliers who uphold his values of local, small, independent and ethical.

“Our coffee beans are singly origin, ethically sourced directly from small farmers and are specifically roasted to order for me by Obadiah in Edinburgh. If I order on a Tuesday, the beans will be with me on the Thursday so are always really fresh. Their sourcing policy pricked up my ears and also my tastebuds – it’s really good coffee!”

Dairy milk will also be sourced direct from farm, the supplier is the Fyvie-based Invercamey Dairy. “The milk comes in traditional pint bottles, and while it’s not as convenient as conventional four-pint milk cartons, if I can reduce plastic, that’s a very good thing.”

The ‘home bakes’ he is serving include flapjack and brownies which are being supplied by another young person – Alice Lane who runs Bakery Lane in Inverurie.

Austen has also installed two tap draft beer dispensers, “so we can set up kegs for an evening function using local craft beers, as well as gins and whiskies from local distilleries,” he adds.

“My plan was to act as a local pop-up for a few months until events hopefully start to open up in 2021,” he says. “Then the plan is to make the drinks’ bar a private event hire for weddings and corporate functions. I’m very excited to get going.

“When events can start again, I’m fully self-contained with a generator and a box trailer to transport the van to the hire location, so hopefully, we can hit remote places in the countryside, and also bigger, more extravagant events as well.”

Austen wants to reduce the one-use disposable culture, so is encouraging customers to bring their own cups; if they don’t, the take-away cups that he is using are compostable ‘vegware’ from Edinburgh.

“I did a lot of research into disposable cups and a lot of them, even if they may be recycled and recyclable, a lot of your classic paper cups still go to landfill,” he explains. “I wanted cups that are compostable, and I will work with a service company, like ScotWaste, to take away the cups to dispose of properly.”

Austen is a registered bartender, so has a personal alcohol licence, and has a traders’ licence for Aberdeenshire which will allow him to run pop-ups which he was planning to try out either in Turriff or Inverurie.

He accepts both cards and cash for any purchases made.