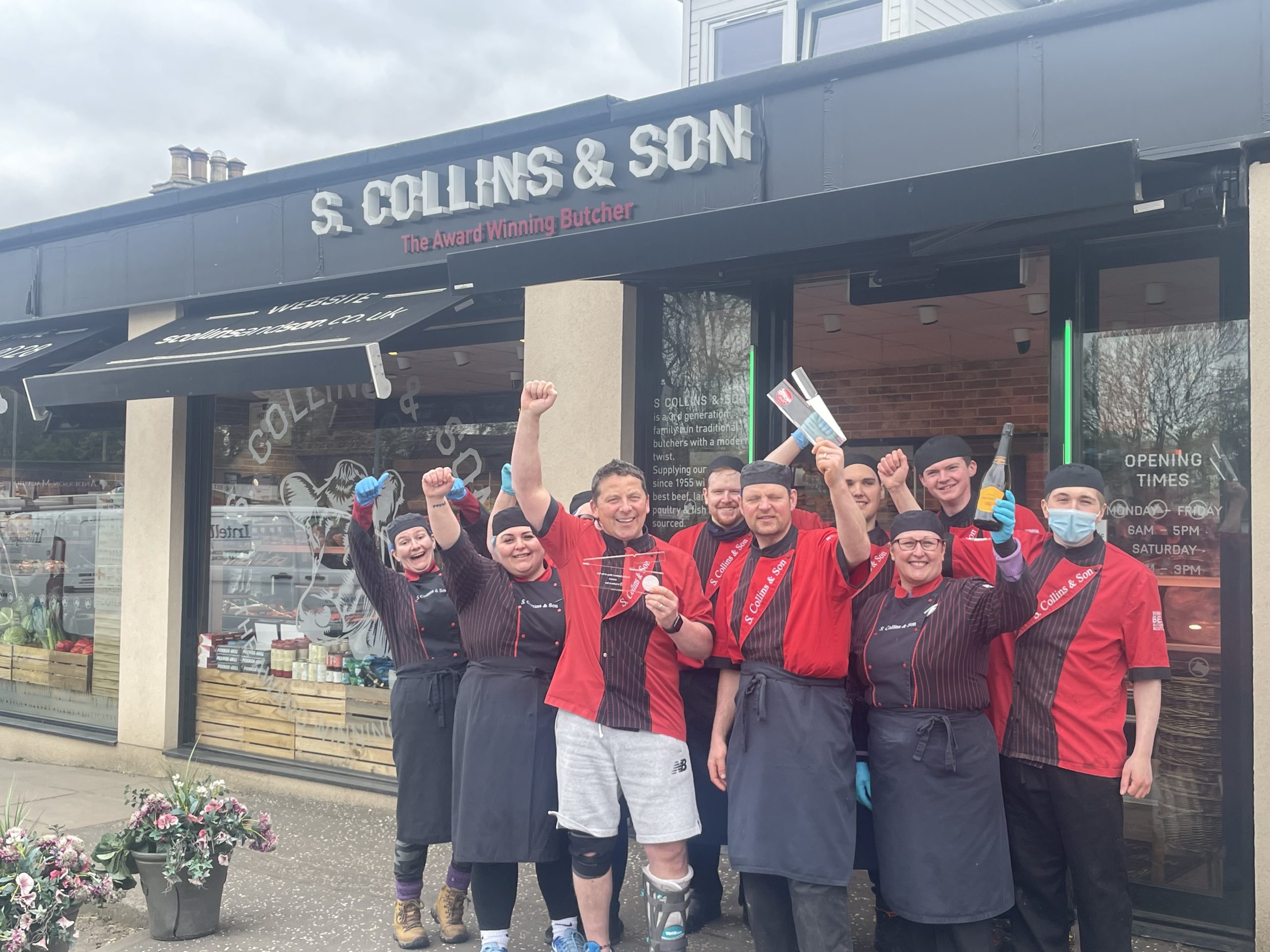 Lanarkshire-based butcher S Collins & Son, has been crowned Butcher Shop of the Year, fending off stiff competition from across the UK, to take home the prestigious national title.

The Butcher’s Shop of the Year Awards took place at the Farm Shop and Deli Show in Birmingham on Tuesday, April 26 and are the only UK awards dedicated to honouring and celebrating the butcher trade.

Winner Stewart Collins was delighted to take home the UK title for the very first time, having won the Scottish Butcher Shop of the Year award four times previously, but narrowly missing out on the overall award.

He took the opportunity to dedicate the win to his team and thank them for their unrelenting support over what he explained had been a tough two years.

“We are absolutely over the moon to pick up the UK award for the first time and it is testament to the hard-working team who work tirelessly, day in and day out, to produce the outstanding products that we offer our customers.

“Everyone has been through a lot in the last couple years, it has not just been physically challenging, but it has taken its toll on the team mentally and emotionally,” Stewart continued. “It has been wonderful to see the whole community pull together in the village, and we wouldn’t be here if it wasn’t for our loyal staff and customers. We hope by winning this award we can give back to those who have supported us and give them the recognition they deserve.”

Stewart took over the business from his father in 2004 and is the third-generation butcher in the family. He is supported by his brother Fraser, who joined the business in 2006, Managers’ John, Kelly, Christine & Craig with wife Giselle, and a team of 40 staff.

Quality Meat Scotland sponsored the award for Scottish Butcher Shop of the Year and Brands Development Manager, Gordon Newlands, had the honour of presenting the award on the day. Commenting, he said:

“It is wonderful to see a Scottish Butcher Club Member take home the UK title for Butcher Shop of the Year as it drives positivity throughout the whole industry because Stewart and the team are buying locally at the Lanark auction mart, employing local people, and serving local customers.

“Over the past two years, support for butchers has skyrocketed, as the public sought out meat from trusted local sources, and butchers worked around the clock to meet the rise in demand,” he continued. “It has been a testing time for the trade and the awards were an opportunity to gather together and give back to the businesses and individuals who have risen to the challenge to continue to provide high quality produce, but have also expanded or developed their products or business, to take the sector forward.”

“It was wonderful to see that all three finalists in the Scottish Butcher’s Shop of Year category were all members of the Scotch Butchers Club. A huge congratulations to S Collins & Son for winning the award and to the other finalists, Bert Fowlie Butchers from Strichen in Aberdeenshire and McCaskies, based in Wemyss Bay, Inverclyde.”

The Scotch Butchers Club is managed by QMS and has over 250 committed members across GB, all are independent butchers and approved stockists of Scotch Beef PGI, Scotch Lamb PGI and Specially Selected Pork.

For more information on the club visit https://www.scotchbutchers.com/