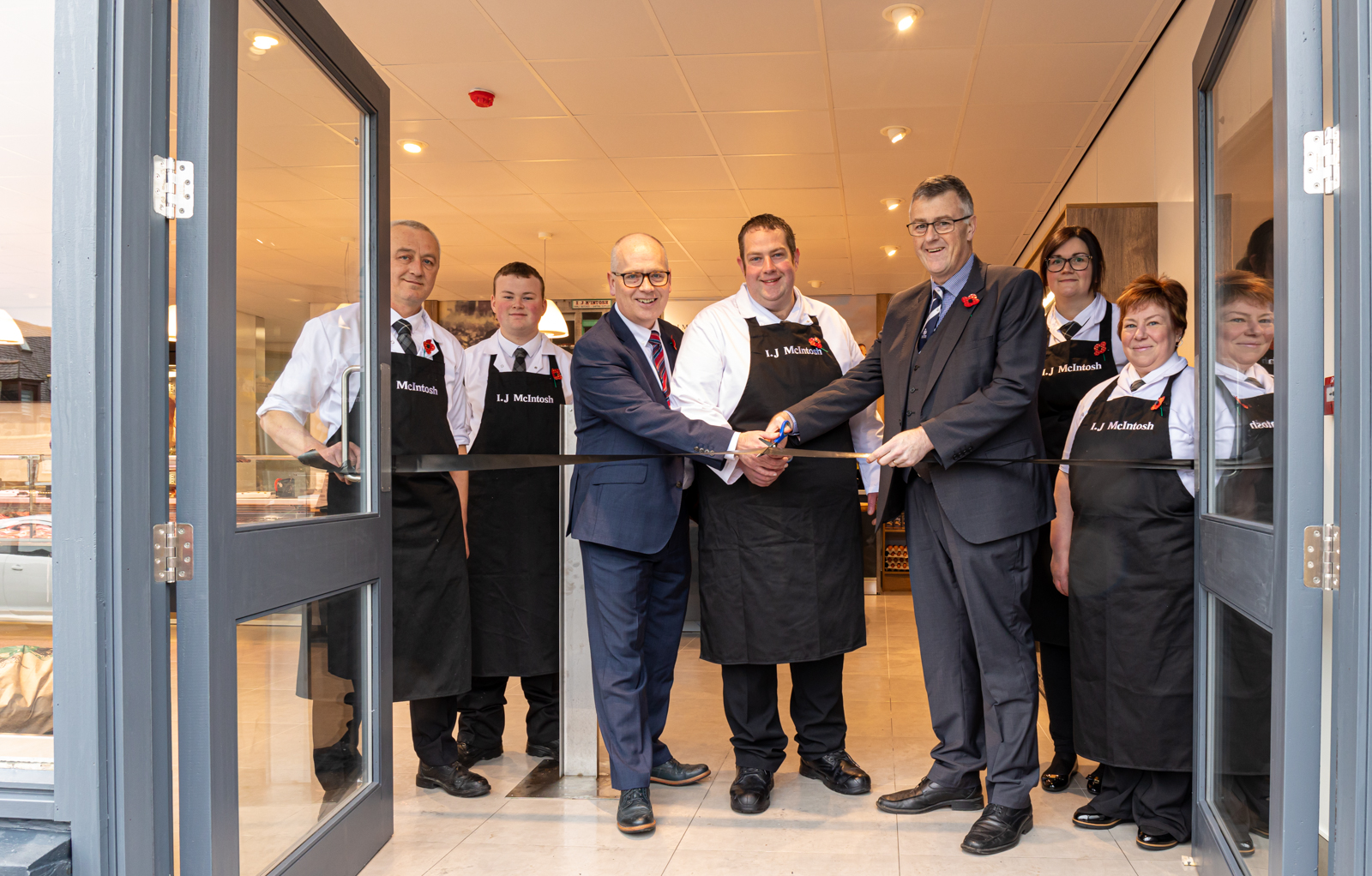 After nearly 40 years of trading in a small corner shop in Fraserburgh, I.J McIntosh Butcher has made the move to a new custom-built eco-friendly premises in a bid to expand and future proof the business.

The new shop, which was opened on Friday 12 November and will stock Scotch Beef, Scotch Lamb and Specially Selected Pork, is a family-run enterprise that has been managed by Gavin McIntosh since 2017.

“The business was started by my father who worked as a messenger on a butcher’s bike until he began his apprenticeship in 1967. He brought his first shop in Fraserburgh in 1982 and after I left school, I joined him in the business.

“It’s always been a dream of ours to expand, but it took a while to find the right shop.”

Gavin says that, luckily, their new premises – an old local car dealer’s showroom – is only a minute’s walk from their original shop and is custom-built for the modern world.

“When we secured our new location, it provided an opportunity to build the shop we’ve always dreamed of. As a business, and personally, I’ve wanted to do my bit for sustainability, so the new shop is fitted to be as environmentally friendly as possible.”

Investing in equipment, lights, and fans that are low wattage, refrigeration insulation that is low CGC impact and wall cladding that is low CFC impact has resulted in potentially the ‘greenest’ butcher’s shop in Scotland.

“Because it’s a large building – approximately 200m2 – we’re in talks with an energy company about putting solar panels on the roof to harness and generate electricity that will not only power the shop, but a future electric vehicle we plan to purchase to make deliveries.

“We continue to source our produce locally and have invested in new machines that use recycled packing. This means that our customers purchase products with low food miles, consciously packaged with a focus on helping the planet,” says Gavin.

“It’s an honour to officially open the new I.J McIntosh Butcher shop. It’s heartening to see that businesses are prepared to step up to the plate and invest to improve and adapt to customer expectations in such a demanding and ever-changing consumer market.”

Tom Gibson says that it’s a model shop for the modern-day butcher:

“It’s really fantastic to see what Gavin and the team I.J McIntosh Butcher have achieved and it’s been a delight to support him, as a member of the Scotch Butchers Club, as he enters this new era.

“Butchery is an age-old craft that has modern values and butchers, such as Gavin, are now taking that forward; investing in their businesses for the future, keeping them up to date so they can thrive.”

For more information on Scotch Beef, Scotch Lamb and Specially Selected Pork, or to find out more about the Scotch Butchers Club, visit https://www.scotchbutchers.com/.