European red meat importers celebrated for their support for Scotch 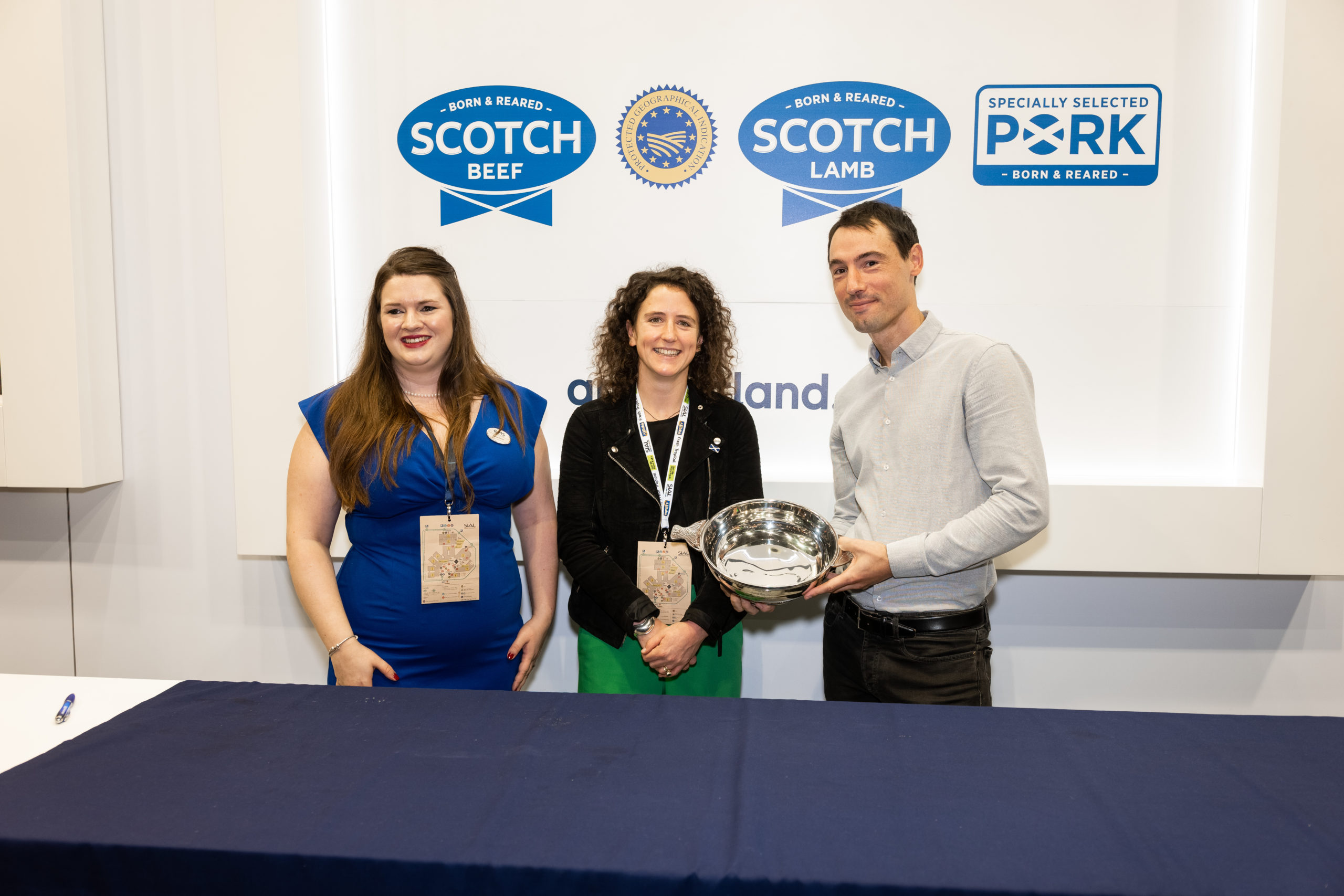 Scotch Beef PGI importers Lesage & Fils from France and Nice to Meat from the Netherlands received awards from QMS Chief Executive, Sarah Millar and Chair, Kate Rowell, during a reception on the QMS stand in SIAL Paris, one of the world’s most influential food fairs. French-based Scotch Beef and Scotch Lamb GI importers, Macquet, were also acknowledged for their longstanding support for Scotch.

Family business Lesage & Fils has been purchasing Scotch Beef from meat processors Dunbia Highland Meats for almost a decade, supplying approximately 1200 professional customers in France, Europe and across the world with their speciality, Scotch Angus, amongst other products.

The buyers at Lesage & Fils praised Scotch for its consistency, tenderness and appropriate fat cover that appeals to their markets. Niall Brennan, UK Sales Director (Primary) at Dunbia, said:

“We are proud of the long-standing partnership we have built with Lesage & Fils and are delighted to see them recognised for their loyalty and commitment to championing Scotch Beef. Partnering with high calibre importers who promote the quality and add value to the Scotch brands is at the core of our industry’s success and we look forward to seeing continued demand for Scotch Beef over the coming years.”

Also receiving the Scotch Beef Distributor of the Year accolade, Nice To Meat has been working closely with Broxburn-based AK Stoddart since 2019, with sales growing 180% year-on-year, and this trajectory is set to continue.

“We are delighted that Nice To Meat has been recognised by QMS for their commitment to Scotch Beef PGI. Passionate about the values that align so closely with our own in terms of quality, traceability and sustainable rearing, we look forward to working together as we continue to serve our global markets.”

Working with Scotbeef for over 50 years, Macquet supplies Scotch Lamb and Scotch Beef to the retail and food service sectors in France, marketing Scotch as quality products and positioning them in a premium range.

Simon Dowling, Director, from Scotbeef said: “Despite Brexit, the pandemic and other market challenges, Macquet has continued to build trade with us over the decades. And aside from our consistent trading relationship, they have been an avid supporter of one of Scotland’s largest agricultural events, the Scottish Premier Meat Exhibition, for the past 30 years, sponsoring the best export lamb.

“As such strong advocates for Scottish red meat, we were thrilled to see the Macquet Family recognised by QMS at SIAL.”

During the event, Ms Rowell took the opportunity to highlight the importance of international trade and reinforce the credentials of the Scotch brands:

“Scotland is now, and shall continue to be, open for business. We are committed to strengthening our much-valued relationships with overseas customers, who acknowledge and embrace the high standards and quality beef and lamb reared by Scottish farmers.

“With our abundance of natural grazing land, over supply of fresh water and world class animal welfare, Scotland is the perfect place to produce natural red meat products.

“Once again, I would like thank Lesage and Fils, Nice To Meat and Macquet for recognising and appreciating all that Scotch stands for, and praise your determination to deliver quality produce for your discerning consumers and catering customers.”

To find out more about Scotch Beef and Scotch Lamb, visit www.qmscotland.co.uk.